B.I.T.A. BOARD MEMBER WELCOMED BY LORD MAYOR OF CORK 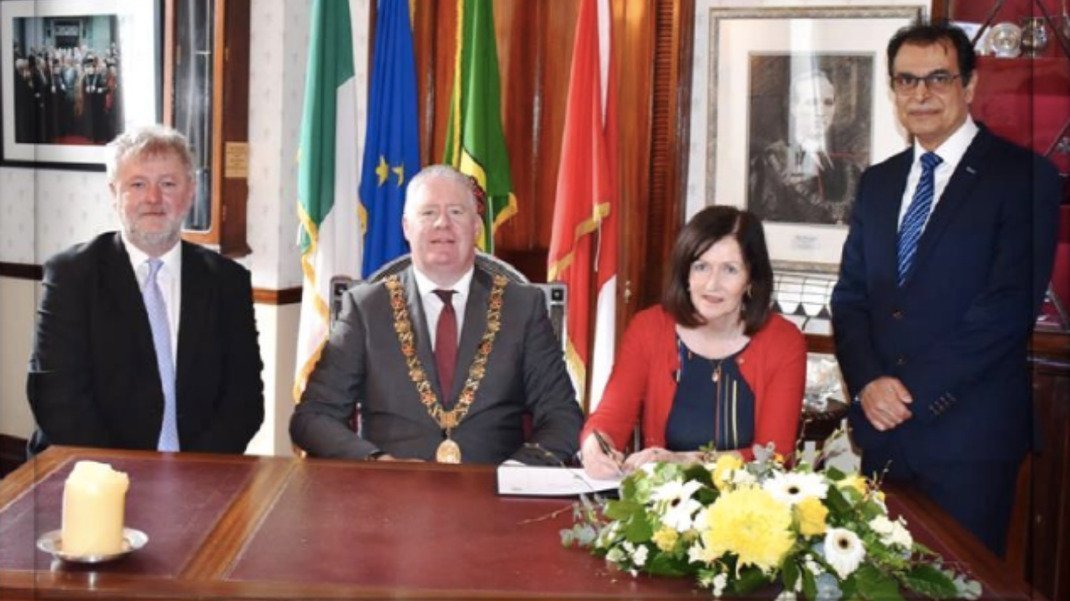 On the afternoon of April 26, 2019, Dr. Michael Casey, who heads the British and Irish Trading Alliance‟s programme on Education, Research, Innovation and Culture (E.R.I.C), was among a number of guests of the Irish Lebanese Cultural Foundation (I.L.C.F.) to be received by Cllr., Michael Finn, Lord Mayor of Cork at an official reception in his Mayoral chambers, City Hall. (Dr. Casey is also a Board member of the I.L.C.F.) Over one hundred invitees attended the soirée which included many Lebanese citizens living and working in the Cork/Munster area. Also present were distinguished representatives from the Irish army, navy and police forces (An Garda Síochána), academics from University College Cork (U.C.C.), Cork Institute of Technology (C.I.T.), the Cork School of Music and the Crawford College of Art. The Lord Mayor also noted and thanked representatives from the Cork Chamber of Commerce and Cork College of Commerce, senior and junior members of the Irish judiciary, Dáil Éireann TDs and members of the international diplomatic Corps. The Lord Mayor was also in support of B.I.T.A establishing a chapter in Cork, the second city of the Irish Republic. Representing the Irish media at this auspicious event were representaives of Global Broadcasting Ireland and the Limerick Leader.

On the subject of the I.L.C.F., Dr. Casey says: „It takes a wild imagination to picture a truly open society – one where freedom of expression and democracy are paramount, and where no individual holds a monopoly on the truth. Envisioning such a world is the starting point of the I.L.C.F.‟s work and philosophy. For the I.L.C.F. the arts, throughcultural exchange - in all of its varying forms - is the key to bringing about a positive understanding and dialogue between our two Christian countries. (The Lebanon is the only Christian Arab country in the Middle East.) By supporting culture and the arts we work to propel challenging ideas to new frontiers. By giving shape and voice to these goals, we remind ourselves,” he says, “that the world we hope to someday see/realise already exists in our creative and spiritual endeavours. The notion of beauty and creativity, through the media of poetry, literature, music, the fine and applied arts, ultimately allows us to share a vision of a more enchanting, invigorating and enduring world.”